ENL
ENL
Menu
Back to Posts

Herbs and Spices for Brain Health 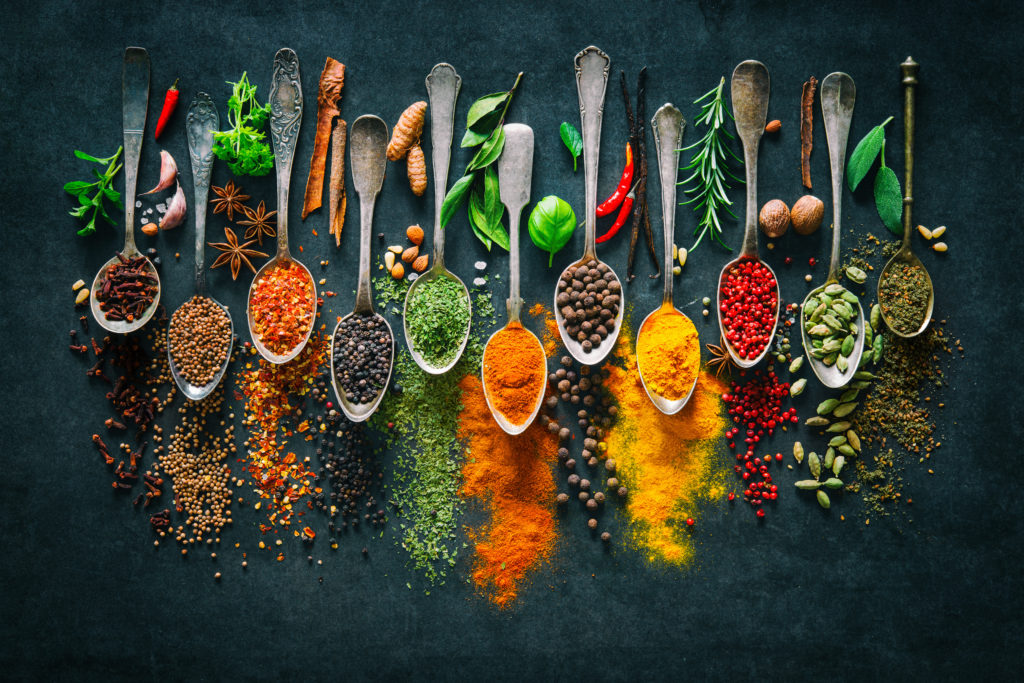 One of the greatest pleasures I get when I am cooking is experimenting with flavours. There  is nothing to compare, in my opinion, with using some of the most natural sources in the form of herbs and spices – not only the flavour they add but the colour and potential medicinal benefits.

Your brain is constantly processing, analysing, deciding, reacting, and it needs support to function at its best. Whether you want to combat mental fatigue at the end of a long day, or maintain cognitive function as you age, herbs for memory and the brain might help.

Some of the most common herbs and spices that people use to add flavour to foods may also fight memory loss. According to the International Journal of Preventive Medicine, there is a growing body of evidence suggesting that spices may prevent, or even halt, neuro degenerative disorders commonly seen in ageing, such as Alzheimer’s disease.

Cinnamon while improving blood flow to the prefrontal cortex, this sweet/savoury spice has been found to improve working memory in older adults and prediabetic people. It has also been shown to inhibit tau aggregation (the tangles seen in Alzheimer’s Disease) and to lower cholesterol, fasting glucose, and HbA1c levels and improve insulin sensitivity.

Tip: 1 teaspoon of cinnamon can be sprinkled over your oats/breakfast or added to your morning shake.

Turmeric contains curcuminoids, which are the chemical components that give it its distinctive yellow colour. These chemicals, particularly curcumin, have piqued the scientific community’s interest. Curcumin has been proven in lab trials to break down amyloid-beta plaques (a characteristic of Alzheimer’s disease).   Previously published research in the journal Annals of Indian Academy of Neurology,  the author’s writing backed up these findings:

Curcumin as an antioxidant, anti-inflammatory and lipophilic action improves the cognitive functions in patients with Alzheimer’s Disease. Due to various effects of curcumin, such as decreased Beta-amyloid plaques, delayed degradation of neurons, metal-chelation, anti-inflammatory, antioxidant and decreased microglia formation, the overall memory in patients with Alzheimer’s Disease has improved.

Ginger Ginger is an anti-inflammatory that may help protect against neurodegenerative diseases as well as lowering oxidative stress, which causes brain cells to age and die.  Ginger alsoincludes antiemetic properties that can aid with nausea and vomiting.   It is also thought to aid inthe reduction of cholesterol.

Note:  Because ginger has natural anticoagulant effects, consult your doctor before using ginger supplements if you are taking anticoagulant medication.

Tip: Grate three teaspoons of fresh ginger root, add it in one cup of boiling water and leave for 10 to 15 minutes for a fragrant ginger tea. Strain and add some fresh mint and, if you want some sweetness, add some natural/local honey.

Tip:  Nutmeg can be grated into rice dishes, soups and into your oats in the morning.

Rosemary This wellknown herb may give new hope in the treatment of Parkinson’s disease by protecting against the cognitive deterioration associated with dementia. It has been proven that simply smelling rosemary can aid memory

Tip: Add to dressings, salads, roasted vegetables, it also adds amazing flavour to poultry and meat. Pop into a jug of water with some mint for a refreshing drink.

Tip: Add to dressings, salads, roasted vegetables, it also adds amazing flavour to poultry and meat. Pop into a jug of water with some mint for a refreshing drink.

Thyme This flavourful herb helps to protect neurons in the brain from premature aging. It also increases the amount of active omega-3 DHA (docosahexaenoic acid) in the brain. Omega-3 fatty acids can increase working memory, executive function, and mood, and decrease brain atrophy.

Tip: Make a thyme butter to use as a basting sauce for grilled meats and vegetables.

Saffron According to a 2016 study, saffron may help persons with Alzheimer’s disease enhance their memory. Saffron was also found to be equally beneficial as antidepressant drugs, in treating mild to moderate depression, in various tests conducted at the University of Teheran in Iran. Memory loss and forgetfulness have been linked to depression.

Tip: To make a mood-boosting side dish, add approximately ½ teaspoon of saffron to two cups of rice/couscous/quinoa while it’s cooking.

Sage Sage tea has long been used to treat digestive and circulatory problems, as well as bronchitis, cough, asthma, angina, inflammations of the mouth and throat, depression, excessive perspiration, skin illnesses, and a variety of other ailments. The available scientific research on sage demonstrates that the aptly named spice improves memory in both young and old people, as well as reducing cognitive decline linked with Alzheimer’s disease. Sage works by blocking an enzyme that breaks down acetylcholine, a neurotransmitter that is required for memory enhancement.

Tip: Toss a couple of finely chopped fresh sage leaves with a roasted garlic clove and rub over a chicken before roasting.

Mint The majority of people associate mint with toothpaste, gum, or breath fresheners. Mint leaves, on the other hand, provide numerous health benefits. The aroma of peppermint boosts memory and concentrate, according to a study published in the International Journal of Neuroscience.

Tip: Mint leaves can be added to water or smoothies or chopped and added to any salad for a fresh, summery touch.

When it comes to brain health, there are a variety of herbs that can help with regulating behaviours and illness prevention.The positive effects of these herbs are nothing short of amazing, with functions ranging from memory enhancement and problem-solving cognition to directly assisting the brain’s ability to repair itself following neurological harm!

Finally, while these herbs are generally regarded safe to consume, it’s always a good idea to consult your doctor or nutritionist before incorporating any bioactive material into your daily routine.

Your Path To Positivity
Free consultation

We will be sharing ideas, thoughts and news about retreats/events and much more.  If you would like to be keep up to date just pop us your details and we will stay in touch…

This website uses cookies to improve your experience while you navigate through the website. Out of these, the cookies that are categorized as necessary are stored on your browser as they are essential for the working of basic functionalities of the website. We also use third-party cookies that help us analyze and understand how you use this website. These cookies will be stored in your browser only with your consent. You also have the option to opt-out of these cookies. But opting out of some of these cookies may affect your browsing experience.
Necessary Always Enabled
Necessary cookies are absolutely essential for the website to function properly. These cookies ensure basic functionalities and security features of the website, anonymously.
Functional
Functional cookies help to perform certain functionalities like sharing the content of the website on social media platforms, collect feedbacks, and other third-party features.
Performance
Performance cookies are used to understand and analyze the key performance indexes of the website which helps in delivering a better user experience for the visitors.
Analytics
Analytical cookies are used to understand how visitors interact with the website. These cookies help provide information on metrics the number of visitors, bounce rate, traffic source, etc.
Advertisement
Advertisement cookies are used to provide visitors with relevant ads and marketing campaigns. These cookies track visitors across websites and collect information to provide customized ads.
Others
Other uncategorized cookies are those that are being analyzed and have not been classified into a category as yet.
SAVE & ACCEPT

Enter below for your change to win £100 worth of great prizes.

This is a UK mainland only competition. Competition closes 10pm on 10/06/21. Winner will be contacted via direct message or email.